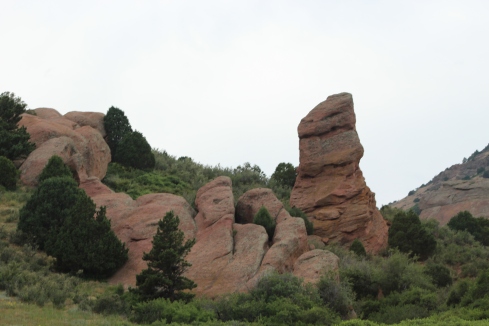 Two and a half years ago when I went to Lakewood, Colorado for training, I had no idea I would end up moving there. I start the drive out there one week from today.

This is monumental in more than one way. My partner of three decades will remain in Florida for the time being so we will be doing the long distance thing. Also, I’m returning to the place that most influenced the land of New America/Karst, where the Karst Series is set. I will be finishing up the third book in the series surrounded by the mountains that inspired it.

The Karst Series may end up being a bit of a misnomer. I do not plan to write more than three books in this series, so perhaps it should have been called the Karst Trilogy. I just wasn’t sure when I first started writing it. I should have known though, since three is my favorite number and I tend to do a lot of things in threes. Having said that, after a short break from dystopian fiction to pen the sequel to Pausing, I plan to write a novella-length prequel to the series set in a more contemporary time.

I believe Kai’s Heart and Naomi’s Soul are my best work. And I believe Misha’s Promise (coming out in Spring 2019) will be even better yet. But “best work” and “best selling” is not interchangeable. Someone recently asked me, upon hearing that sales of both Karst books are not as high as my contemporary work, why continue something that isn’t selling as well? My answer was this: Legacy. The collection of books I write over my lifetime will be my legacy. I want to be able to look at the collection as a whole and say “I did this. I did this and it is good.” And I want to be able to look at each individual book and be proud of it. In order for me to be able to do this, I must be convinced that my books aren’t all telling the same story, over and over. It’s fine (better than fine even) to have a common thread, but it can’t all feel the same.

I know dystopian fiction is not for everyone. And I know that the beginning of Kai’s Heart may seem too bleak to some readers. My mother told me she almost put the book down in the first chapter, but once she got past those first, harsh scenes, she couldn’t put the book down. My mom isn’t a fiction reader, so this felt amazing to hear. I’m so glad Mom gave it a chance, and I hope that others who think it might not be for them will do so as well.

A big part of Kai’s Heart (aside from the love story) is the set up for New America. In contrast, Naomi’s Soul , while still moving the big picture forward, focuses more on the interpersonal relationships. If you haven’t already given it a try, why not pick up the first two books of the Karst Series. You may just do as I did and fall in love with Kai, Rachel, Camryn, and Naomi.