Happy Clean Slate Day! I love a fresh start on a new year. But first, I’d like to take a quick look back. 2017 was a busy and amazing year for me.
I participated in 11 book events that included 7 panels and 11 readings. Included were two GCLS (Golden Crown Literary Society) events, the big conference in Chicago and another in Amelia Island. This is such a great organization for LGBTQ readers, writers, and publishing professionals. Check out the GCLS website. The 2018 conference will be in Las Vegas. I can’t wait!

I also had the honor and pleasure of participating in the Lone Star Lesfic Festival for the second year. Austin is a beautiful city and the folks at the festival are wonderful. Lone Star is also where I get to see the most of my Affinity Rainbow Publications family at the same time—always brilliant fun.
2017 also brought my second attendance at the LCLC conference in Palm Springs. Readings and panels and hanging with lesfic friends around the pool in beautiful Palm Springs? Hell yes. This is a must-do for lesfic lovers.
Rounding out my diverse book events was Provincetown. I’d been to events during Women’s Week twice, but this was my first July visit for an event. I joined Lucy J. Madison and Kim Baker for a reading and Q&A. I admit, although it’s more expensive to go to P-town in July than in October, I was so glad not to be shivering like the first two times I went.
Sabrina made her debut in Pausing and traveled to three book events with us—Austin for Lone Star, Provincetown for GirlSplash, and Palm Springs for LCLC. She is such a calm and cool traveler, and hasn’t let it go to her head that she has a part in one of my books. 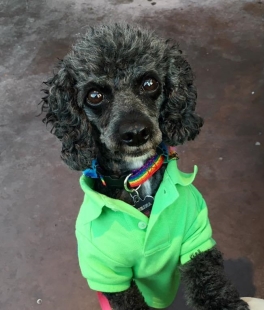 I continued working closely with my Florida writers group, Sappho’s Scribes of Florida, and four of the events in 2017 were with them. Thanks again Ali Spooner, Alison Solomon, and Barbara Clanton for being friends and part of my writing life.
Pausing quickly became my most successful book to date and I couldn’t be more proud of, or happy for, my sixth novel with Affinity Rainbow Publications. This was such a fun book to write. I’ve been asked about the third-mile confessions in the book and I must say that the best parts of the conversations during the running scenes were taken word for word out of my real life runs. I whined more than Jordy does while running, but didn’t look nearly as hot as she does while doing so.
In June, I signed a contract with Affinity Rainbow Publications for my seventh novel, Kai’s Heart. This is the first of the Karst books, a dystopian romance series set in New America, post WWIII. This is unlike anything I’ve ever written and I am thrilled to have this first in the series coming out on March 1, 2018. Check out this original art by Samantha Brodek. Having this visual helped to hone the story. 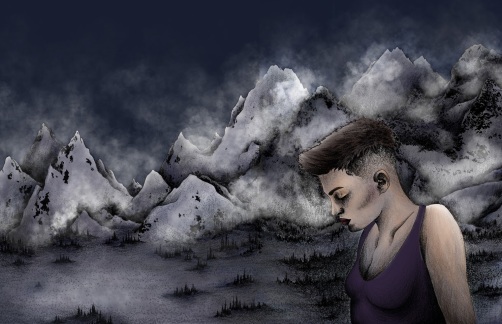 I admit that sometimes it seems like all I think about is writing. Now to prove that it isn’t, here are a few other things from my 2017:
I continued running, but only ran in one race, the Marco Island 5-Mile Hill Run on December 23rd. But I played a lot of Pickleball, including being one half of the winning team for my neighborhood’s 1st Annual Turkey Bowl Pickleball Tournament. I have to say, Pickleball is addictive. And it’s a great workout.
After two years of exercise and increased calcium/D3/K/Mg intake, I had good news in November. I went from mild/moderate/severe osteopenia to mild/mild/normal. Exercise and supplements work!
Naples surprised me with a huge, wildly successful Women’s March (January) and its first Pride event (June). The number and diversity of the attendants made me so proud of my current city.
September brought Hurricane Irma to my town. The stories that unfolded around me were at once heartbreaking and uplifting. So many people stepped up to assist their neighbors that it helped rebuild my faith in people after a year of divisive and derisive politics and news stories.
October saw my biggest vacation ever. After four days in Palm Springs for LCLC, my travel companions (including Sabrina) and I drove up the California coast, then inland to go back south. The trip by the numbers: 19 days, 12 hotels, 3 National Parks, 4 state parks, and >1700 miles driven by my partner Pam. By the time I got back to Florida, I’d been away from work for seven weeks due to the hurricane closure and vacation. Yes, it was quite hard to go back!

Big Cypress National Preserve continued to play a huge part in my life. I was able to hike, bike, and photograph the landscape and critters of the unit of the National Park Service where I work. The swamp is still one of my all-time favorite places in the world.
I went to Virginia in December to visit family and friends. It’s always great to spend time with my mom and sisters. It was cold. I had a book event at the Hershee Bar in Norfolk, where I once worked and where I met my partner, Pam. It snowed. And it was damned cold. And it was so worth it to see my Virginia peeps.
Earlier this year Pam and I invested in a cider taproom. As I type this, we are making plans to go to Asheville, NC in a few days to attend the official Grand Opening. TreeRock Social had a soft opening in November that I was unable to attend, so I am thrilled to be going to this shindig on January 6th. All six of the women who own this bar will be there for the party. TreeRock will be the setting for my upcoming contemporary romance series. This is going to be so cool!

Overall, 2017 was a pretty terrific year for me. I want to thank everyone who brought love and joy into my year. I cannot wait to get my hands on the clean slate of 2018. Something tells me it’s going to be monumental.