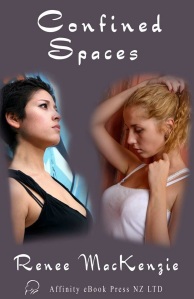 Confined Spaces has a new look!

Wrapping up and moving on…

What a relief, my first three novels are safe and sound with Affinity eBooks Press!

Nesting, Flight, and Confined Spaces were all written while I lived in Augusta, GA. It was there that I belonged to the most incredible writers’ group imaginable. I want to give a shout out to Karin, Gretchen, Rhonda, Steve , Kyle, Rhian, Nancy, Donna, and Dawn, all who made part or all of those five years so memorable. I also want to give a big thank you to a few people I had the pleasure of working with in my college writing classes: Parish, Kristopher, and Dena.

All three of my novels are very different from each other. Confined Spaces is a lesbian romance with a lot of sex in it. Flight is a hybrid novel that follows both a lesbian and a straight storyline until they collide in a frenzy of sex, drugs, and rock & roll. Nesting is my “creating family” novel that is a universal story with several lesbian characters in it (and a little sex).

Now to the present. And what a wonderful present it is. Next month, my fourth novel, 23 Miles, will be published. This book is my first mystery and again, very different from the others. I knew I would eventually write about a minor character from Flight, Shay Eliot, and I had the character Talia, the liar, in my mind for a future story. I was busy writing a story set in SW Florida when I started thinking (again, as I had thousands of times over the decades) about the unsolved Colonial Parkway murders. Okay, I didn’t start thinking about it again, I started obsessing. The next thing I knew, I’d put my work-in-progress aside and started writing what I’d called Liarhead.

A week after I submitted Liarhead to Blue Feather Books, I got the email telling me they were going out of business. I was thrown for a loop, trying to figure out what to do about Liarhead and the previous books.

That’s when Affinity eBook Press came into the picture. I signed contracts for all four of the novels. One of the first things we did was change the name of the new book. No one but me liked the name Liarhead. Almost immediately, I decided on 23 Miles. The Colonial Parkway is twenty-three miles long.

23 Miles means more to me than just the story of Shay and Talia. I’m hoping it does a good job finding its audience and that the audience is as moved as I am by the real-life story that motivated this work of fiction. I will have much more to say about 23 Miles in the upcoming months (hell, maybe even years) as I try to use it to make a difference in the cases known as the Colonial Parkway murders.